The majority of back-pain patients have not experienced a specific trauma from an accident or major injury prior to the onset of their problem. The cause of most back pain is the cumulative effect of too much sitting, improper lifting techniques, or lack of exercise, specifically to the muscles that support the pelvis and spine, known as the core. All of these factors, primarily sitting, cause the low back to be vulnerable; making it possible to injure it while doing an activity as simple as bending over to tie a shoe! The spine was already compromised! The simple task of bending over to tie the shoe was the "straw that broke the camel's back."  When this occurs, the surrounding back muscles go into spasm to protect the stressed or injured tissues of the back.

In the United States, low back pain is one of the most common conditions and one of the leading causes of physician visits. Recent studies have correlated the health effects sitting on the job to those suffered by individuals who smoke. While the resulting health conditions are different between the two groups, they are equally as debilitating long-term. In fact, at least four out of five adults will experience low back pain at some point in their lives. One half of all working Americans admit to having back symptoms each year. The cost of this care in the US is estimated to be a staggering $50 billion annually!

Chiropractic care works on correcting misaligned or "stuck" vertebrae. Enhancing the function and removing the subluxation, reduces the amount of adjacent inflammation and swelling. Once that pressure is removed from the nerves that surround that vertebrae, the pain disappears and proper flexibility and function is restored! Common symptoms include tenderness, pain, stiffness, pain that radiates into the buttocks or legs, difficulty standing erect, weakness, leg fatigue while walking, and discomfort while sitting.

Low back pain treatment at Bellevue Chiropractic in Bellevue. Serving the Bellevue, NE area for chiropractic and massage therapy needs.

Send us an email

Find us on the map 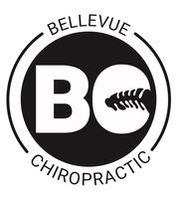